Interview - From the country of Santa Claus 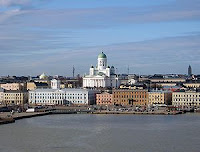 Have you ever thought about visiting Finland? Have you ever met someone from Finland? That's your chance! I mean, not actually "meet", but get to know a bit more about Hanna-Leena Koykka, a medical student from Helsinki, who is currently living in Estonia (another country you probably don't know much about).

Where do you live and what do you do?
Hanna - I used to live in Helsinki, Finland. I worked in an oil company as Human Resource Expert. Prior to that, I studied Economics and Intercultural Encounters. At the moment I live in Tartu, Estonia and study to be a medical doctor. (Quite a change in my career, don't you think?)

When did you come to Brazil and how long did you stay?
Hanna - At first I came to Brazil as an exchange student. I lived with a family and studied with other Brazilian students at high school. That's how I got to know Mieko (our mutual Brazilian friend). I lived in Jundiaí (SP) for one year. I liked Brazil quite a lot and so I came back for a half year to take part in a trainee programm in a Finnish company in São José dos Campos (SP). And I have also been on holiday in Brazil just to visit some friends.

What's your opinion about Brazil? What's the image Brazil has in your country?
Hanna - I really like Brazil and the people. Brazil as a country is so big that I can't say what the best part is, but one is the nature with its forests and beaches, animals etc. I also think that the most friendliest people I have ever met have been Brazilians. Brazilians are also often optimistic and open, easy to get along with. And they are very beautiful too ;-). In Finland Brazil is often connected with samba, Carnival and football. We also know about favelas and the violence in Rio. Mainly the image is still positive.

What are the main differences between Finland and Brazil, besides the weather, obviously? Is there anything in common?
Hanna - I would say that common is the everyday living. In both countries we get up in the morning, go to work/school, see some friends etc. The biggest difference is propably the attitude to living. As I said, in Brazil people are optimistic and in Finland we are more worried. 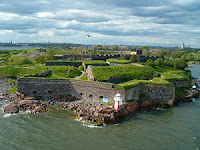 What are your favorite places in your city and here in São Paulo?
Hanna - In Helsinki I love the sea. In a summer time we often go to little islands around the city (the biggest is Suomenlinna, which is an old sea fortress). In São Paulo I like most the atmosphere, the feeling that everything is in my reach and that everything is possible. But I don't know SP enough to tell you my favourite spot.

What advice could you give to someone who wants to work/study in your country? Hanna - Studying at the University in Finland is free, and the quality is said to be quite ok, so it should be a good idea to come to study here. But the problem is that getting a visa/permit is quite difficult. And finding a job is also often difficult if you don't speak Finnish.
Postado por Vanessa Prata às 17:20