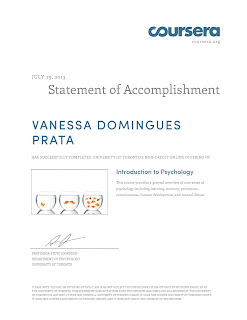 That was my final article for the course:


Much more than $ 0.20
These past weeks, there have been several protests in São Paulo and Rio de Janeiro cities, Brazil, against the increase in bus and subway fares, which have gone up from R$ 3 to R$ 3.20 (about US$ 1.6). The first demonstrations have been marked by violent behavior on both sides (protesters and especially the police, who fired rubber bullets even against journalists who were just working). Although it seems an irrelevant increase, the underlying reasons for the protests are deeper: the population, especially the poor commuters, suffers everyday with an inefficient public transportation system, which is crowded, unsafe and expensive, considering the minimum wage in the country is about US$ 340. Besides, the country has huge problems about public health, education and unemployment, not to mention corruption in the politics. What’s more, the government is spending about US$ 13 billion with the World Cup 2014, to be held in Rio de Janeiro city. Therefore, the bus fare increase was just the last straw. (check NYT article at http://migre.me/f2aNo and BBC’s at http://migre.me/f4fp9).
It is possible to connect these protests with some aspects of the course we are attending, particularly with social psychology. First of all, the demonstrations just happened some weeks after the new fare was implemented, although it had been announced much earlier. This may be related to the ideas of conformity, as demonstrated by Solomon Asch’s experiment, and bystander interference, in the context that it is very difficult to be the “first voice” against a political decision, in a country which is known for being “gentle” and “friendly”. Everyone usually complains in private about the problems of the country, but almost no one takes the first step into action, so it took long to have the first protest. “If everybody accepts the political rules, I’m not going to be the one against it” seems to be the common sense, at least it was until these protests.
Another aspect to be considered was the violence of the police in repressing the demonstrators, which can be related to the concepts of authority in Milgram’s experiment and the Stanford prison experiment by Zimbardo. Although the policemen in general in Brazil are poorly paid and, therefore, could show some sympathy for the protesters, what we saw was an abusive use of force, as in Stanford experiment, under the justification that they were just “following orders”, as in Milgram’s.
The events can still be related to the just world hypothesis, in the sense that the population is divided in supporting the demonstrators or the policemen. It is common to hear people, especially older ones and of a better social class, saying that the victims of the police “deserved” to be beaten up, as they were all vandals (there were indeed acts of vandalism, but it does not represent the actions of the majority of people in the protests). Just like the examples mentioned in Steve’s video, as when someone is considered “guilty” for the mishaps such as being raped because of the clothes the person is wearing, or losing their homes in a storm because they live in a dangerous area, here, too, there is this idea that everyone who stands up for their position in a demonstration is a vandal and should be punished.
All things considered, we can state that social psychology may explain many world events, and that some experiments performed decades ago can still be related to current situations. It is interesting to note that the idea that “good people do bad things” is more alive than ever, as in these protests in Brazil we see “good workers” setting fire to trash cans and breaking glasses of banks and buses, and we also see “good policemen” being extremely violent to repress a social movement, even against people who were just passing by or working in the area. As in Rober’s Cave experiment, at the moment we have two opposing prejudiced groups, who would do much better if joined forces to fight a common enemy: the fight for better living conditions in the country.