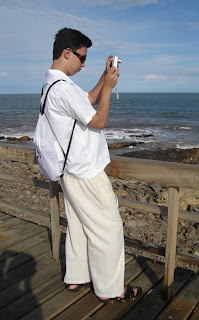 Cássio Aoqui is a special friend who always inspires and motivates me. He has visited more than 50 countries, in 4 continents, including Nepal, Syria, Cambodia and other "different" places. The curious thing about our friendship is that it grew stronger exactly during the period he spent working in Japan and we were "pen-pals" (yes, exchanging letters, and not emails, as he lived in a tiny city without internet access). That's why he was chosen to be my 30º interviewee.
How many countries have you visited so far and which ones were the most exotic ones?
Cássio - To tell the truth, I have no idea of it. For the last account, I had been in more than 50 countries so far, but then I decided not to list them anymore so that it wouldn´t become a matter of quantity or records... What can be considered a visit to a country anyway? Is it valid just to step off the airport for a few hours (like I did in Taiwan)? Or is it a visit to take a tour by bus which, accidentally, crossed the border, with a five-minute walk on the beach (that actually happened in Oman)? I really don't know... The most exotic ones? Well, I enjoyed Syria, Turkey, Nicaragua, Guatemala, Slovakia, Nepal and Cambodia a lot!

How long did you spend abroad when you traveled around Europe and Asia? How did you plan this trip and how did you support yourself financially?
Cássio - I traveled for about six months in Europe with my good friend Erica, in campings (we stayed in hostels and at our friends’ only a few times), in 2003. It was such a great challenge living in a tent and wandering around the whole Western continent for months, but looking back, I have no regrets at all. For this part of the trip, I saved money working as a journalist.
Then I came back to Brazil for a few weeks only to take a working visa to Japan. There I lived for six months, working as a blue-collar for Fuji (yes, the photographic company). Then, in 2004, after a week exploring Tokyo and the surroundings, I went to China and did the whole circuit in Asia, including Tibet (I classify it as a country), Nepal, India and the Southeast Asia. The greatest adventure of my life. Everything was planned in details using guidebooks (mainly "Lonely Planet" and "Let’s Go") and internet sources.

How was the experience of working in Japan? How did you find a job there?
Cássio - At first, I thought Japan would only be a mandatory place in order for me to save money and keep traveling. But it has literally changed my life, the way I see myself and my relatives. I’m used to saying there’s no other place where I grew so fast and intensively like there. As a "sansei" (third generation of Japanese people in Brazil), I could easily obtain a "dekassegui visa" (for foreigners who want to work there).

You have visited "different" countries, such as places the Middle East and Nepal. What were the main differences between these cultures and Brazil? 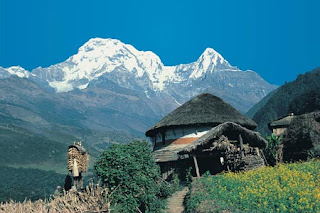 Cássio - The countries in the Middle East (except for Lebanon) have a strong influence of the Qur’an and the islamism, while in Nepal or some other Asian countries buddism is the main influence. Both have in common the fact that it’s not only a religion matter. Buddism, just like Islam, conduct their way of living, in a philosophic way. I never felt so safe and surrounded by such peaceful and genuine people in the West like I did in countries like these ones. That said, it's important to note that, despite all the differences, we are all human beings and we have much more in common than one can imagine.

You travel on your own frequently. What are the advantages and disadvantages of traveling alone? Is there any place you visited where you though it was dangerous to be alone?
Cássio - I usually say nobody can be really happy if he/she can’t find peace traveling on his/her own. These are the sort of people who deposit hope of happiness in others instead of in themselves. In my case, I confess, the need to be alone is stronger, and I do love traveling with the sound of my mind, especially in long journeys around the world. But for short trips, it’s always a pleasure for me to travel with the one I love and my friends, for instance. And traveling in groups has the advantage of being considerably cheaper. And, I agree, safer --less hussle, less scams, less pickpocketing. In Nepal, for example, there was a Maoist insurgence while I was there and luckily I joined a group of other terrified backpackers and we manage to protect ourselves and eventually flee to India. There I also got really sick and wished I had someone to take care of me...

You usually take long trips, a month or more. How do you plan your trips? Do you know everything you are going to do in advance or you just "go with the wind"? What advice could you give to people who want to take a long trip?
Cássio - I always buy a good (i.e., with no photos at all but lots of words...) guidebook, like "Lonely Planet" or "Rough Guide". Read everything to choose the places to visit. Then, I start with the logistics (air and ground transportation and lodging). Meanwhile, I check the bureaucracy involved (like visa and permits). I don’t usually care about restaurants and read texts about history, flora and fauna later, on the road. When I have questions, I check them in sites like the Thorn Tree Forum. But now, for the very first time, I’m going with the wind. I’ll be on the road in less than three weeks for three months and have no clues about what to do...

What's the image that some countries you visited have about Brazilians? Have you ever felt any kind of prejudice for being Brazilian?
Cássio - Only in China some people were not kind, but that’s because of the conflicts with Japan. Generally speaking, Brazil is "Ronaldo, Ronaldinho and Kaká" out of Brazil. And sometimes, "City of God". That’s all. Unfortunately.

What are the top 5 places you visited?
Cássio - Only four: Africa, America, Asia and Europe, in alphabetical order. =)
Postado por Vanessa Prata às 21:54