Interview - First time in Brazil of a South African 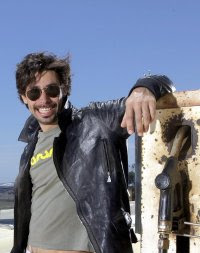 Misha Moon Teasdale is a South African Production Manager, who is coming to Brazil next week for the first time (he's missing Carnival here, though). Check this interview he gave me while organizing everything for the trip.
Tell us something about you.
Misha - I'm from Cape Town, South Africa, and I was born on 8 April 1982. I'm majored in Industrial Design (2006) by Cape Peninsular University Of Technology, South Africa, and I work as a production manager - film and stills industry.

Why are you coming to São Paulo? Do you know Brazil?
Misha - I'm coming to Brazil to make a documentary for VW on developmental football. I'll be there on Wednesday, for five days, and it's my first time in Brazil!!! I'm so excited for Brazil...My uncle lives there.

What other places in the world have you traveled so far?
Misha - I have been all over Africa. I drove from Cape Town to London on a mission called Love to Africa. Europe and the UK...I've also been to Israel!!! Love Israel :-)

What are your favorite places in your country? What are "must-see spots" for tourists in South Africa?
Misha - I love the East coast...We call it the Garden Route. It's green and beautiful...so filled with life and goodness!!! South Africa is so filled with gems so I really wouldn1t know where to start. Come to SA and find out.

What's the image that South Africans have about Brazil and Brazilians?
Misha - We love Brazilians and I think Brazil sounds like a super country!

How do you see the World Cup in South Africa? Will it bring more benefits than harm to the country? Is there any disadvantages?
Misha - The world cup is coming and we are all super excited about it. It's bringing loads of good things. Mostly I'm happy about the new improved infrastructure. The vibe is going to be amazing. Everyone is really looking forward to it...as long as the world turns up and and enjoys the goodness we have to offer.

Does South Africa still face the effects of the Apartheid? What's the political and social situation in the country these days?
Misha - The affects of apartheid are still here and will be for a long time to come. The division between the poor and working class is so huge. Houses are being built, people are being trained and educated but it's difficult. So many Africans come from all over the continent to find work and alleviate poverty for themselves which causes a huge strain on South Africa and the local people.
Postado por Vanessa Prata às 16:00