The 8 Easiest Languages for English Speakers to Learn

The 8 Easiest Languages for English Speakers to Learn
On an increasingly international planet, multilingualism is fast becoming a desired trait in employees, meaning today's college students enjoy an advantage if their degree plans require a second (or even third!) language. English speakers in America particularly find this possibility challenging, as far too many schools downplay the importance of learning to speak something additional. Fortunately, those who feel as if the system failed them in this regard can still pick up a foreign language relatively quickly. The following, ranked as Category I by the Foreign Service Institute but listed in no particular order, offer up comparatively easy starting points. Starting points which might very well prove useful for more than touristic reasons!

Romanian
Strangely enough, the Foreign Service Institute does not rank German as one of the easiest second languages for native English speakers. Romanian, a Latin Romance derivative with heavy Slavic overtones, is labeled as one of the simplest. It preserves many of the same grammatical elements of its forebear because of its comparatively isolated evolution. FSI places Romanian in Category I, meaning it should take 23 to 24 weeks – or 575 to 600 hours – to attain proficiency.

French
Like Romanian – not to mention every other language listed here – FSI considers French a Category I pursuit. Hailing from the Romance family, it loaned so many vocabulary words to English that native speakers probably won't struggle as much as they would with something far less linguistically prominent. The French government itself regulates the language, so the grammar and spelling rules are far more rigid than most others. Actually, they haven't strayed too far from the original Latin, so anyone with a familiarity with the dead tongue probably won't struggle too much with their lessons.

Spanish
With Spanish becoming more and more ingrained into everyday American life, United States citizens are lucky it's labeled as one of the easiest for English speakers to pick up. FSI places it in Category I because of its straightforward sounds and grammar system. Seeing as how this Romance language contributed so many everyday words to the seemingly ubiquitous Germanic offshoot, classes will likely prove relatively painless. Do keep in mind that Latin American and European Spanish do sport some differences, so make sure to find lessons fitting proper regional or business needs. 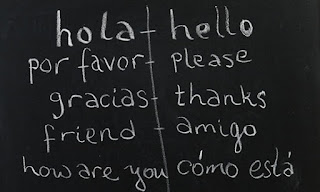 Italian
Italian, French, Romanian, and Spanish aren't the same thing, of course, but knowing one means nominally comprehending the basics of the other. A not-insignificant chunk of English vocabulary comes directly from Italian's Latin Romance roots, making it an easy enough start for anyone looking to pick up a second language. It's especially breezy for native English speakers who already hold a proficiency in others from the same family. Funny enough, despite its famous relationship with Catalan, Italian is actually 89% lexicographically similar to French, as opposed to 87% to the Spanish dialect.

Dutch
Seeing as how Dutch comes from a West Germanic lineage, it makes perfect sense that native English speakers would take to the language pretty swiftly. In fact, over time it has started absorbing more and more vocabulary words from English, so the two already resemble one another somewhat. According to FSI, some of the inflections are identical as well, though Dutch still holds more in common with its ancestor than its cousin. Afrikaans, a Dutch offshoot spoken in South Africa, is also considered a Category I language.

Norwegian
As with Swedish, this Scandinavian tongue started out as a Germanic-Norse hybridization before gradually morphing into its own – so of course it's considered an ideal second language for native English speakers. Many of its words are actually borrowed from English, though the grammar structure hews more closely to German and Old Norse. Newcomers might face difficulty with the fact that, unlike French (from which it also borrows) and other similar languages, Norwegian isn't nearly as standardized.

Swedish
Another blend of Germanic and Norse, Swedish holds more in common with Dutch and Norwegian than English, but that doesn't compromise its Category I status with the FSI. Because of its complex vocabulary and grammatical structure, those for whom English is the primary language might stumble a bit at first. Though, like its linguistic neighbors, many English words have wormed their way into the Swedish lexicon.

Portuguese
Portuguese as spoken in Portugal and Portuguese as spoken in Brazil do depart from one another, so figure out which classes focus on which dialect before forming any commitments. Being a Romance language means inevitable overlaps with French, Spanish, Italian, and Romanian, though it involves more vowel sounds than all of these. As of late, Portuguese has absorbed a goodly amount of English words, though it does also borrow liberally from other Romance tongues.
Postado por Vanessa Prata às 12:21