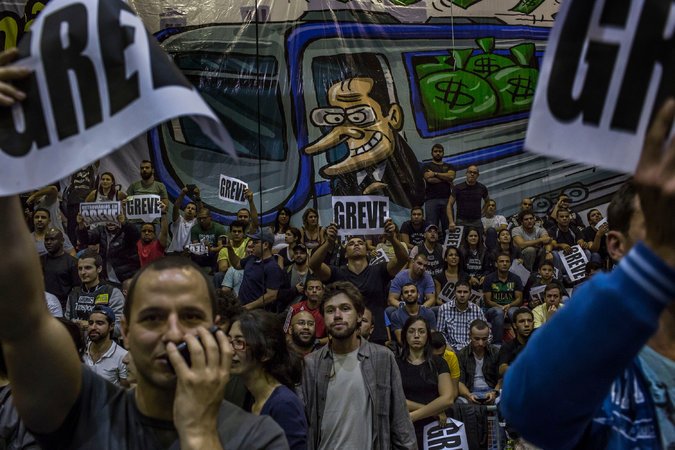 RIO DE JANEIRO — Brazil’s list of feats since ending authoritarian rule in the 1980s is as long as it is varied, including antipoverty programs pulling millions into the middle class, the democratic election of presidents who suffered indignities under the dictatorship and the surging growth of tropical agriculture to help feed the world.

But instead of coming together to extol such triumphs on the global stage as the host of the World Cup, the soccer tournament starting on Thursday with teams from 32 countries, Brazil is marked by rifts, with some people genuinely excited about the event while others are simmering with resentment over its ballooning costs and a sluggish post-boom economy.

While thousands poured into the streets in 2007 to celebrate Brazil’s winning bid to host the World Cup, bitter strikes are now roiling major cities. In São Paulo, where the opening match between Brazil and Croatia is just days away, riot police officers on Monday used tear gas to disperse striking subway workers. Brazilian legends of the sport, from Ronaldo to Romário, are voicing shame and disgust over troubled preparations in the nation that has won the World Cup five times, more than any other country.

“This is the strangest atmosphere I’ve ever witnessed in Brazil before a World Cup, as apprehension and apathy threaten the normal excitement,” said Antonio Risério, a historian who explores soccer’s role in shaping Brazil’s national identity.

Only 34 percent of Brazilians think the World Cup will help the economy, which is in its fourth straight year of slow growth, according to a survey by the Pew Research Center. Thirty-nine percent say the tournament will actually hurt Brazil’s image around the world, according to the face-to-face survey of 1,003 randomly selected adults from across the country.

More than 200 million people live in Brazil, Latin America’s largest democracy, and the country has about as many opinions on hosting the World Cup. President Dilma Rousseff, in an interview last week in Brasília, defended loans from state banks for building lavish World Cup stadiums, and said Brazilians were gearing up to embrace the tournament.

“The closer we get to the Cup, the more Brazil is going to show its passion for soccer,” Ms. Rousseff said.

But signs of such enthusiasm still remain somewhat sparse. And with political analysts arguing over how the Cup’s outcome may influence this year’s presidential election, Ms. Rousseff’s government is clearly hoping for a strong showing by Brazil’s national team in a tournament unmarred by major problems.

The sense of malaise is partly about the preparations for the World Cup itself, but also reflects a deeper, underlying anxiety about the direction of the country as the economic slump has persisted amid waves of antigovernment protests, reflecting demands from the growing middle class for better services. The divisions are manifesting themselves in unlikely ways; even as many Brazilians voice support for a soccer team that has long been the nation’s passion and pride, others are expressing unhappiness with the sport being placed above other priorities.

Before a warm-up match last Friday between Brazil and Serbia, the subway strike in São Paulo affected millions of commuters. Raising the fear of more unrest, police officers dispersed the strikers by beating them with batons in scenes recorded on smartphones and spread on social media.

The game disappointed, too. Brazilian fans at the stadium even booed Neymar, the 22-year-old star of Brazil’s national team, which limped to a 1-0 victory.

The jeers for stars who traditionally achieve something resembling the status of minor gods came as disenchantment festers with the country’s soccer establishment, tainted by its ties to scandal-scarred FIFA, the organization that oversees international soccer and the World Cup, and by revelations of bribes to top Brazilian soccer officials.

While the national team is still received warmly in many places, the players had to pass through a gantlet of protesters here in Rio de Janeiro this month on their way to their luxurious training camp in the mountains. The chant of the striking teachers who led the protest: “An educator is worth more than Neymar.”

“That talk about the national team being the patrimony of Brazil, the affirmation of our identity and civility and cordiality, no one swallows that anymore,” said Arnaldo Bloch, a columnist for the newspaper O Globo.

Despite the tension surrounding the Cup, many Brazilians point out that the country has a tradition of warmly receiving foreign visitors and pulling together at the last minute complex events like the Pan-American Games in 2007 or last year’s World Youth Day, an international conference of Catholic youths which featured a visit by Pope Francis.

If Brazil starts winning, some contend that optimism will surge around the first World Cup in the country since 1950, and easily exceed the low expectations. “People are worried about how much has been spent,” said José Evaraldo Bezerra, 48, a doorman at a residential building in Brasília. “But once we see the first game, the parties will start.”

To the relief of authorities who contend Brazil will put on a great show despite some airports and transit systems not being completed, the streets in some areas in Brazilian cities are finally becoming festooned with yellow and green ribbons, the colors of the national team.

Even so, many Brazilians say the decorations are less extensive than in the run-ups to other World Cups. In Jardins, an upscale São Paulo district, many store owners opted against such adornments out of fear that their premises would be targeted for damage by anti-World Cup protesters, said Rosangela Lyra, president of the area’s commercial association.

Still, ire remains widespread over the estimated $11 billion cost of hosting the tournament, including subsidized loans for stadiums in cities like Brasília, the capital; Cuiabá, a remote agribusiness center; and Manaus, an industrial hub deep in the Amazon, with paltry soccer fan bases.

The animus over the Cup is compounded by dismay at the delays and rising costs of the 2016 Summer Olympics, which Rio will also host. Mexico was the last country to host these events in succession, holding the Olympics in 1968 and the World Cup in 1970, when its government tried to project its standing as a rising power in the developing world.

Those ambitions were tainted when security forces massacred pro-democracy protesters in Mexico City’s Tlatelolco Plaza 10 days before the opening of the 1968 Olympics. While crackdowns by Brazilian police have not been nearly as violent, the steady drip of protests has brought certain complaints to the fore.

“The diffuse messages which came together are that Brazilians want public services as good as the stadiums FIFA got for the World Cup,” said Jerry Dávila, a professor of Brazilian history at the University of Illinois.

While complaining about the quality of services in Brazil has grown into a pastime, the debate over hosting the Cup has also heightened sensitivity about how the country perceives itself and how it is perceived abroad.

In what may prove to be one of the World Cup’s legacies, and perhaps even a parable to other countries with ambitions of hosting the tournament, some in Brazil’s thriving but imperfect democracy are questioning why the country sought such a massive undertaking when its institutions already had trouble delivering on more mundane matters.

“We’re the country of winging it, and that same characteristic which makes our soccer shine keeps us in an idyllic position in relation to any project,” said Helio Gurovitz, editor of Época, a weekly newsmagazine. “We plan poorly, monitor even worse, leave everything until the last hour and believe it will work out in the end,” he added. “Until, one day, it doesn’t.”
Postado por Vanessa Prata às 21:53