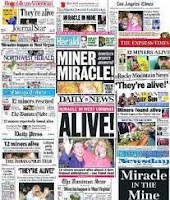 Better late than never... I still have things to write about Braz-Tesol, and one of them is about the workshop I attended on using Newspaper Headlines in the class, given by Marcia Becker, from UFPR.
Here are some extracts of the presentation she sent me.

Textual infrastructura of a headline:
1 - The Simple Present is used instead of verbal tenses which would indicate actions that ocurred in the past (present perfect, simple past).
Ex.: Obama takes power

2 - Infinitives are often used to refer to a future event, but will or going to are also used.
Ex.: President Obama will lead by example / Obama to be sworn in on Bible that was used by Lincoln

4 - Non-verbal sentences are also used.
Ex.: Dawn of a new era / In DC and beyond, celebrations and a sense of hope

6 - Use of puns - amusing use of a word or phrase to suggest several meanings, or which sounds like another word.
Ex.: Obama gets clearance to keep his 'BarackBerry' (a pun with BlackBerry)
Some suggested activities that can be done in class based on newspaper headlines and articles(some are in Marcia's presentation, others are my ideas):
1 - Grammar activities - Rewrite sentences from headlines into passive or active voice.
2 - Grammar - Fill in the blanks with the corresponding articles or prepositions, previously omitted from the text by the teacher.
3 - Grammar - underline all the verbs in Simple Past (or any other verb tense) in the article.
4 - Writing skills - Write a paragraph based on the headlines.
5 - Writing - Write a headline based on a piece of news.
6 - Reading skills - Match the headlines to the first paragraph of the stories.
7 - Reading - Predict what the story is about based on the headline. Read to check.
8 - Vocabulary - Rewrite the headlines into more "normal" language, using more common words and adding the necessary articles and auxiliary verbs.
Postado por Vanessa Prata às 18:38